I can sense my trusty old kettle recoiling in shame at the sight of the Stagg EKG. What once seemed a perfectly fine appliance now appears frumpy and sounds louder than a steam train by comparison.

The EKG, a sculptural stainless-steel electric kettle, is a truly elevated water-boiling specimen. Created by San Franciscan startup Fellow, it is technically a pour-over kettle. That means it has a long, narrow goose-neck that enables you to precisely control the flow of water, something particularly useful when making the pour-over coffee favoured by many coffee snobs.

That said, it’s also great for brewing tea and most other standard kettle purposes (assuming those are not boiling en masse: its 0.9-litre capacity is not huge). I have the Great Fellow model, a new collaboration that comes in a fetching green-and-yellow colour combo but possesses the same carefully considered design features as the regular EKG. It’s entertaining to play with. Operated via a big medallion-shaped button, it heats water quietly and to a temperature of your choosing, depending on what is optimal for the coffee or tea you are drinking – and can maintain its temperature for up to an hour. If you opt for the EKG+ connected model, you can also activate the kettle via a smartphone app.

Preparing water to a specific temperature enables you to create better-tasting brews (and can be useful for baking and cooking). The instructions list the ideal temperatures for extracting the flavour of coffee (90-96ºC); white and green tea (76-93ºC) and hot cocoa and cider (88ºC), among others. Yet there’s fun to be had with experimenting to see what tickles your own tastebuds.

There are other temperature-controlled kettles in the market, but few are as elegant or enjoyable to use.

To say that I’m obsessed with the Icebreaker Pop is an understatement. Few things cause me greater anxiety than walking from tap to freezer with a freshly filled ice-cube tray in hand, to say nothing of the indignity of trying to get the frozen cubes back out again. This invention removes all pain and fuss from your ice-making regime. Dreamed up by a Danish engineer, it’s a hollow silicone box covered in (cube-shaped) bumps like an armadillo’s hide. It’s not dissimilar to a hot-water bottle – you unplug its lid and pour water inside before depositing it in the freezer. Once frozen, you push down on both sides of the bottle – cue a satisfying crack – before using the handles to pull it apart, like a puffer fish. Then give it a shake and out tumble perfectly formed blocks of ice. A fantastic fix to an everyday headache. Icebreaker Pop, £24.95

Fancy making fresh pasta but worried the juice isn’t worth the squeeze? Given that the Atlas 150 enabled me to whip up wonderfully springy fettuccine after the gym one night – with little more effort than I’d need to throw together a stir-fry – you can set aside any concerns. The star model from Marcato, a historic brand from Veneto, this hand-cranked machine streamlines the typically fiddly pasta-making process while ensuring good results. Made in Italy from chrome steel or anodised aluminium (and available in a rainbow of attractive hues, including the new copper version), it’s easily assembled and enables you to roll 10 thicknesses – a wider range than most. Unlike many competitors, which can be wobbly and prone to jams, its crankshaft turns with a metronomic clickety-clack sound and is satisfyingly sturdy, producing consistently smooth pasta with just a hint of (intentional) roughness – all the better to absorb sauce. Its pasta-cutter attachment slices three widths – fettuccine, tagliolini or lasagne – and you can buy add-ons for spaghetti et al. Marcato Atlas 150, £59, boroughkitchen.com

Time to employ a multi-cook

A 14-in-one cooker that plugs into the wall and is fitted with a six-litre stainless-steel bowl, the Fast Slow GO is a chunky beast that can do everything from pressure-cooking, steaming and sous-vide-ing to churning yoghurt. I try it first on a risotto: after a few minutes of sautéing veggies, rice and stock in the big silver pot, I fasten its lid and let it do its thing (in this instance, pressure-cooking at high temperatures). That it produces a moreish plate of the famously labour-intensive rice dish – while I sit reading the newspaper – is impressive. And that’s just one of its many skills, of which its greatest is slow-cooking. After prepping ingredients, just press a button corresponding to the relevant mode of cooking; it figures out how long and at what temperature something needs to run. A culinary box of tricks. Sage Fast Slow GO, £169.95

How hot is that chicken in the oven…

It’s fitting that my Thermapen One is sports-car-red because this gadget is – boom, boom – the Ferrari of thermometers. Its big sell? That it can accurately take the temperature of a piece of food – whether a slab of bavette or a chocolate sponge – in one second flat. That’s an impressive step up (if you’re playing the Formula 1 tyre-changing game in the kitchen)from the industry standard of three or so seconds. Handy when you’re cooking something in the oven and don’t want to open the door and let heat escape for longer than necessary. It resembles a large Swiss Army knife fitted with a stainless-steel spike and features a cutting-edge thermocouple heat-sensor system that’s accurate to within 0.3C. Plus its self-rotating digital display makes it readable at whatever angle you harpoon your steak. Thermapen One, £66 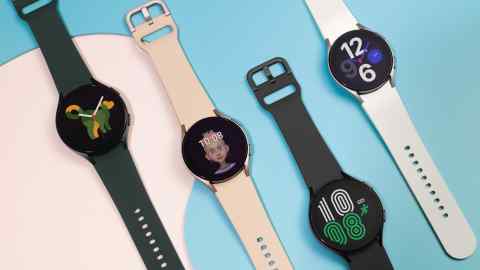