Skip to content
Here in the early going, benchmark comparisons pitting Apple’s latest custom silicon against other hardware are a mixed bag of results. That’s how it will probably go when the revamped MacBook Pro 16 and 14 laptops hit the street—how they fare will depend on the application. One that appears to favor Apple’s newest silicon is Adobe Premiere Pro, with a leaked M1 Max benchmark score trouncing an Alienware laptop outfitted with a mobile GeForce RTX 3080 GPU.
This is in line with Apple’s claims about its M1 Max and M1 Pro, which purportedly not only deliver a huge performance gain over the company’s first-gen M1 hardware, but also is supposedly capable of matching the performance of a high-end Windows laptop at a much lower power envelope. From Apple’s vantage point, it’s the best of all worlds.
It’s going to depend on the benchmark and/or real-world application, though. For example, a recent entry on Geekbench showed the M1 Max posting a 68,870 Metal score. We ran some tests on our 2020 Mac mini with Apple’s first-gen M1, and lo and behold, the leaked benchmark score was more than three times higher (68,870 versus 22,456). However, the leaked score couldn’t hang with a couple of Windows laptops we tested, namely Lenovo’s Think X1 Extreme and MSI’s GE76 Raider, both with a GeForce RTX 3080 on board.

That’s not the case in PugetBench’s Adobe Premiere Pro benchmark suite. Have a look… 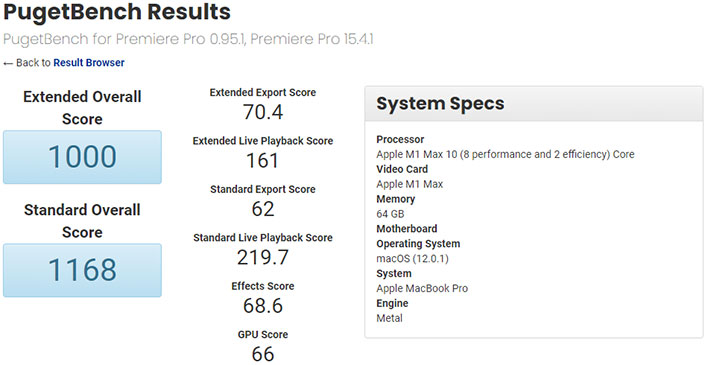 The benchmark entry identifies this as one of the new MacBook Pro systems with an M1 Mac chip wielding 10 CPU cores (eight performance cores and two efficiency cores). The number of GPU cores is not listed, but we have a hunch this is the version with 32 cores (as opposed to 24 cores, which is only available in custom orders).

As configured, it posted an overall score of 1,168 and a GPU score of 66. We don’t have our own collection of PugetBench scores to compare against, but when sorting the database’s results by mobile GeForce RTX 3080 hardware, the best showing we could find was an Alienware laptop. Here’s a look… 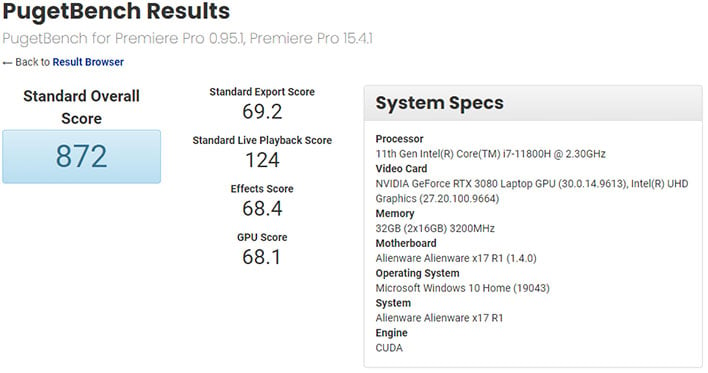 According to the benchmark listing, the Alienware laptop is configured with an 11th Gen Intel Core i7-11800H processor, GeForce RTX 3080 mobile GPU, 32GB of RAM, and Windows 10 Home.

It posted an overall score of 872 and a GPU score of 68.1. So if we compare the numbers, the MacBook Pro with its M1 Max chip beat the Alienware laptop by nearly 34 percent for the overall score, while the GPU score was nearly a wash—the Alienware with its GeForce RTX 3080 scored 3.2 percent higher.

The benchmark’s Live Playback test was the differentiating factor. Everything else was relatively close, but the Live Playback score favored the M1 Max by a whopping 77 percent.

That makes sense if you consider the M1 Max’s enormous unified GPU and CPU memory pool (64GB) and 400GB/s of memory bandwidth. Certain things that fit in memory could heavily favor Apple’s silicon, as apparently depicted here, whereas discrete solutions like Ampere will flex in hardcore GPU compute chores.

As times goes on and more benchmarks emerge—both leaked ones, and official benchmark runs after the latest MacBook Pro laptops ship out—we’ll have a better overall picture of performance, and where the M1 Max and M1 Pro shine.