AORUS has listed its flagship 17X laptop which features the yet to be announced Intel Alder Lake-HX CPUs with up to 16 cores and 5 GHz clock speeds.

Intel has yet to announce its Alder Lake-HX lineup which will be the first laptop chips to rock up to 16 cores. While the specifications of these chips have leaked out and we have also seen some early benchmarks, it looks like AORUS has confirmed that they are upgrading their current lineup with the new offerings.

The main features of the AORUS 17X YE laptop that’s been leaked include:

As spotted by Momomo_US, the AORUS 17X YE laptop has now been listed with Intel’s Core i9-12900HX, one of the fastest Alder Lake-HX CPUs. The CPU comes with 16 cores and 24 threads, incorporates 30 MB of L3 cache, and features a base clock of 2.3 GHz. The maximum turbo clocks are rated at 5.0 GHz for the P-Cores and 3.6 GHz for the E-Cores. In addition to the CPU, memory includes two DDR5 slots which can house up to 64 GB capacities with speeds of up to 4800 Mbps. The whole system is based on the mobile HM670 chipset. 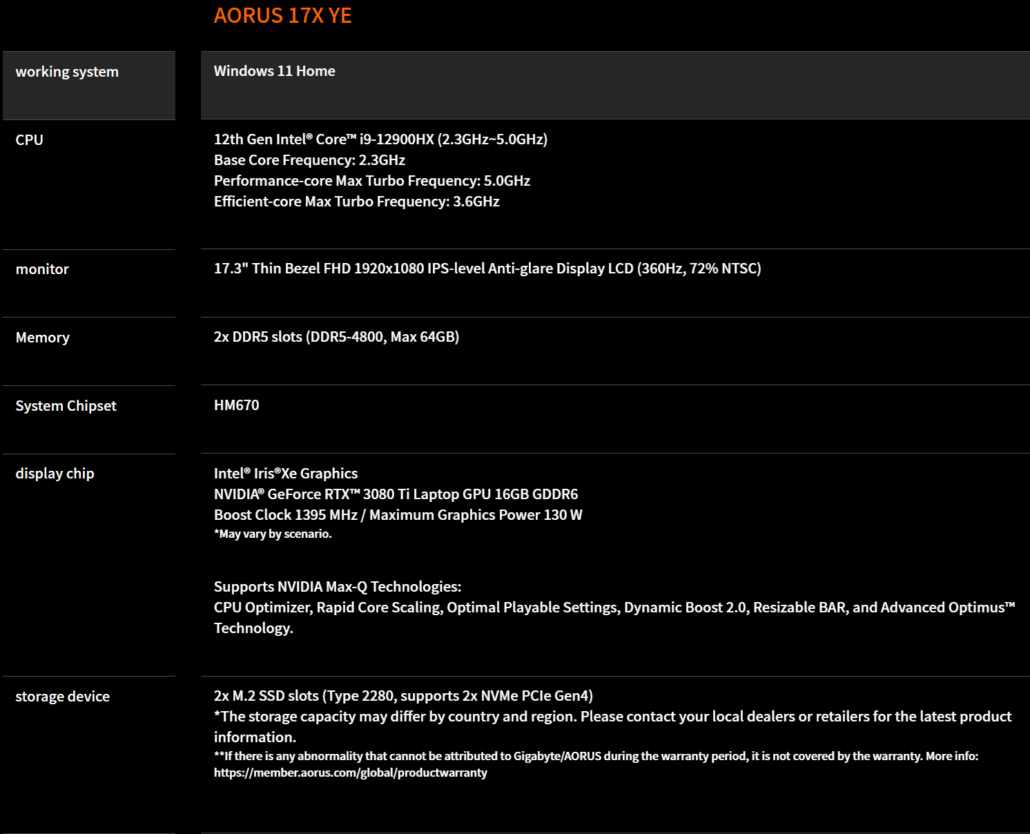 For graphics, AORUS will be equipping the 17X YE laptop with NVIDIA’s flagship GeForce RTX 3080 Ti 16 GB solution. The laptop GPU will operate at a maximum boost clock of 1395 MHz at a rated TGP of 130W. You can expect all the NVIDIA Max-Q features such as CPU optimizer, Rapid Core Scaling, Dynamic Boost 2.0, Resizable BAR, and Advanced Optimum Technology onboard this solution. One thing is for sure, this laptop will require a lot of cooling given its much higher power consumption which will result in higher heat output. At the same time, having a 16 Core 5 GHz CPU and an RTX 3080 Ti in a laptop is very impressive. This would easily become the fastest enthusiast laptop but will also come at a price exceeding the $2500 US range.

Other specifications include dual M.2 slots (PCIe Gen4 NVME compliant) and a 280W transformer that charges the 99Wh Li-Polymer battery. This particular variant will come with a 17.3″ Thin Bezel & FHD IPS display with Anti-Glare. The refresh rate is 360Hz. The whole unit will weigh around 2.7 kg. I/O includes WiFi 6E, BT 5.2, a range of USB 3.2 ports, Thunderbolt 4, audio combo jack & two display outputs which include HDMI 2.1 and MiniDP 1.4. Intel is expected to announce its Alder Lake-HX CPU lineup in early May as teased by ASUS for their ‘The Pinnacle of Performance’ Event.

Business Tips
We use cookies on our website to give you the most relevant experience by remembering your preferences and repeat visits. By clicking “Accept All”, you consent to the use of ALL the cookies. However, you may visit "Cookie Settings" to provide a controlled consent.
Cookie SettingsAccept All
Manage consent