Some things you buy because it would be silly to live without them: a cast iron pan, an air conditioner, or all 9 Fast and Furious movies, say.

A robot to stir the pot (in a good way)

Listen, I’m not going to say that I’m lazy, but I definitely can appreciate some help in the kitchen. Of course, for those of us who don’t have an extra pair of hands from a family member, friend, roommate or partner, there’s the StirMate.

What’s cool about this little gadget is that it’s sort of one-size fits all, and can be adjusted for pot size in the 6-9 inch diameter and 3-9 inch depth range. That’s a huge selection of pots that applies to, and a literal godsend if you often deal with stuck food (like I do whenever I make pasta, I really should be better at stirring than I am). 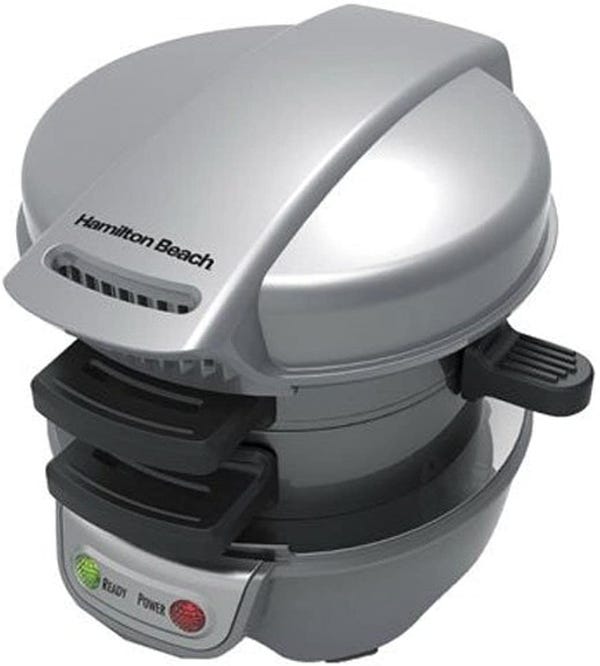 Back when I used to eat McDonald’s religiously, my favorite thing to buy was their breakfast. In fact, I would wake up early specifically to get that coveted McMuffin – at least before they made the smart decision to make their breakfast available the whole day(ish).

Of course, given the pandemic, staying at home, and not ordering from a fast food place where the average order is over a thousand calories, I’m happy to present you with the Hamilton Beach sandwich maker, which can actually recreate the kind of breakfast sandwiches you can get from Mcdonalds without the extra hassle of going down.

The bottom half this little thing holds your bum, ham and/or cheese, with the second top half made specifically to break an egg into, before placing another bun on top and closing the whole thing. Necessary? No. But will it impress your friends and make breakfast slightly futuristic? Your darn tootin’ it will. 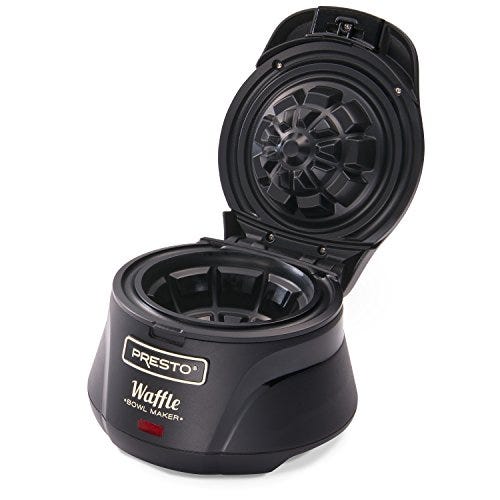 You know, tortilla bowls are actually relatively common, especially with certain types of salads, or even meat dishes. What you don’t see often is a waffle bowl, but hey, need a bowl? Like waffles? Waffle bowl!

I actually think this make sense for things like fruit salads, desserts or even breakfasts. In fact, I’m going to patiently wait to see somebody combine this with the breakfast sandwich maker from above, so we can have a waffle-bowl muffin breakfast monstrosity that will probably be the next Tik-Tok craze (I’d like to apologize for creating the next Tik-Tok craze).

Oh, and the best part is you don’t have to do any clean-up – since you can just eat the bowl!

Put your face on a potato

Potato Pal – Your FACE on a real potato! 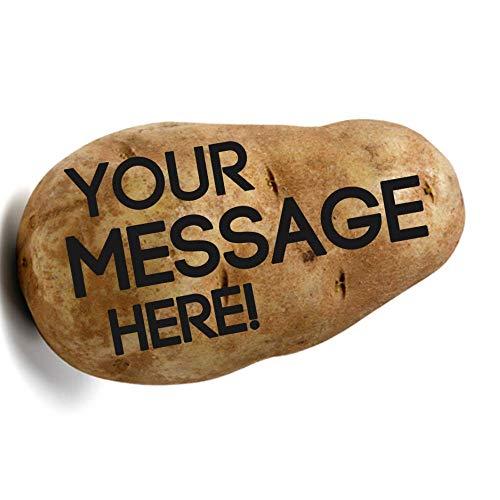 Potato Parcel – Send a message on a real potato!

Science and technology is great; they’ve given us the internet, GPS, mobile super-computers known as smart phones and memes. In fact, you’re probably using a fair mix of those just to read this.

Sometimes though, technology goes too far, and that’s when we get Potato Pal – a literal potato with your face on it.

I don’t know why anybody would want this… but I also don’t know why anyone wouldn’t want it? Won’t your life be immeasurably improved by this potato? There’s about a 50/50 chance that anyone you show this potato to will discover a newfound respect for you, or abruptly decide to hate you for the rest of your life. If it’s the latter, then you never really needed them in your life in the first place. After all, you have a potato now.

With your face on it.

Keep track of how old your eggs are 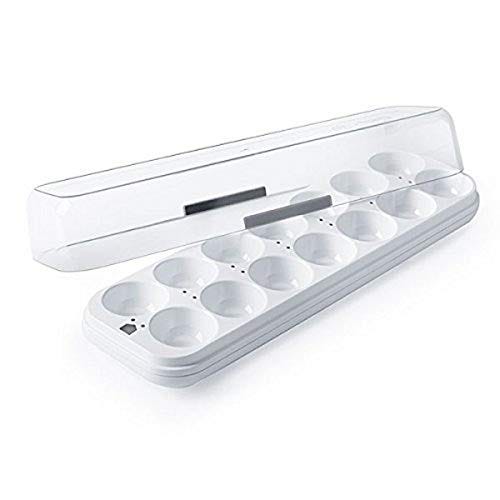 Speaking of the foibles of technology, it seems like everything today has been made smart. Smart TVs, smart vacuum cleaners, smart water bottles (probably), everything has some kind of technology stuffed into it. Probably the strangest thing though is the Quirky Egg Minder, which is a smartified egg holder. How smart? Smarter than me, at least.

Why? Well it can tell you how many eggs you have (when you’re out shopping – it syncs with your phone) or, the actual useful part, telling you which of your eggs is the oldest to help you keep track of when you need to eat it. Honestly, if it was able to tell you which eggs were going bad, this would become a pretty necessary product. 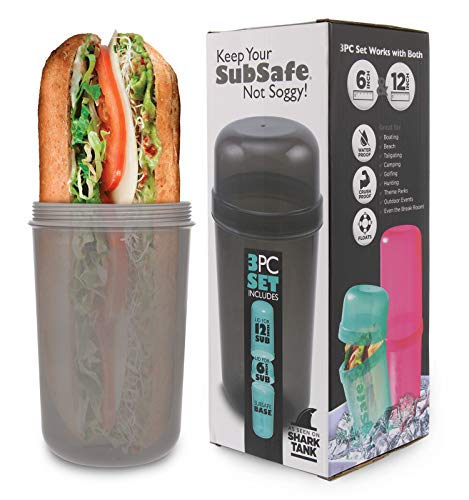 Alright, I’m not going to mince words here, this is literally a phalic shaped, hard-shell container for your sandwich. Now, I know this may look really silly at first glance, but hear me out: it really sucks having a smushed sandwich.

I’m sure we’ve all had to deal with this at some point: we make a great sandwich to take to work or university, stick it in a ziplock and stuff it in our bags or briefcases. Then, once lunchtime comes around we pull the ziplock bag out, smacking our lips waiting to eat that perfect sandwich, only to find the condiments oozing out, and the bread bent in weird and truly unnatural directions.

Well, you don’t have to deal with that anymore if you get this little baby, and on the bright side, it has covers to fit both 6-inch and 12-inch subs. Imagine the amount of street rep you’ll get walking into a Subway with one of these things, am I right?

Or maybe they won’t notice, because they’re exhausted and underpaid fast food workers. Either way, you deserve this sandwich thing. 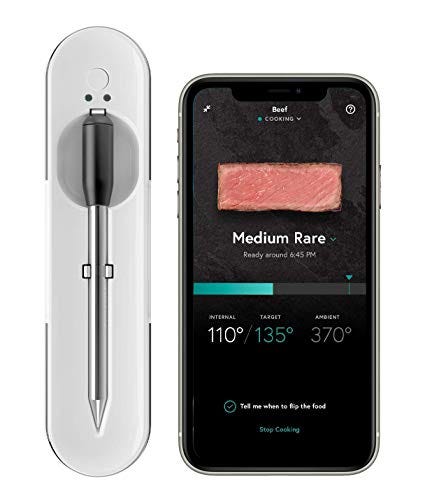 Another product similar to the Egg Minder, this meat thermometer with included wireless at least makes slightly more sense.

With a distance of 150 feet, this is actually great for those who do BBQ or cook stakes while also cooking or preparing other food (or, like, chatting with their friends at the pool). I’ve had my fair share of BBQ parties and had to keep track of several different things, often not next to each other, so I can appreciate a product like this. Even better, it can tell you when to flip meat based on what kind of rarity you want and the temperature it’s reached.

Now obviously you can’t attach this to several slabs of meat, but at the very least if you have a cluster of meat on a grill, you can get an idea of what temperature everything else is.

Cosmetics
We use cookies on our website to give you the most relevant experience by remembering your preferences and repeat visits. By clicking “Accept All”, you consent to the use of ALL the cookies. However, you may visit "Cookie Settings" to provide a controlled consent.
Cookie SettingsAccept All
Manage consent